Building with timber can result in double impact on GHG reduction

In this article, Juergen Kropp gives us an overview of his career path in sustainability, with emphasis on his involvement in combating rising sea levels on the German North Sea Coast. Kropp touches on his deep dense of duty contribute towards shifting the status quo and establishing new solutions and narratives for a more sustainable future. He indicates that he is a solutions-driven and future-orientated person. The actions he suggests should be our focus now are to bring down emissions on a global scale, to change habits of consumption and waste on a personal level, especially in cities, to leverage off solar and wind energy and improve in energy efficiency. Through these efforts, Kropp is positive that the goal of carbon neutrality by 2050 is achievable. He is a pragmatist when it comes to carbon offsetting and acknowledges it has a role to play alongside other efforts to limit emissions and consumption. As a team member of AQ Green TeC, he encourages everyone invested in sustainability efforts to keep working!

Juergen Kropp is deputy director of the Department of Climate Resilience at the Potsdam Institute for Climate Impact Research (PIK) and heads the Urban Transformation Research group. He has joined AQ Green TeC as a senior climate advisor.

1. Climate change and environmental sustainability: How did you become involved and what are you doing now?

I have a long history of connection with climate issues, first as a Boy Scout, then as a member of the Green Party back in the 1980s.  As a policeman for about 10 years I came into contact with the opponents of nuclear power. Their arguments were very persuasive and in the end I chose to gain a better understanding of these big issues. I studied both Physics and Chemistry at the University of Oldenburg in Northwest Germany. Oldenburg has a long tradition in environmental science and it was there that I first met my future boss at Potsdam Institute for Climate Impact Research (PIK), John Schellnhuber. In many intriguing discussions he convinced me to dive more deeply into climate change issues.

My studies focused on analysing the atmosphere, but I also worked on the impact of climate change in relation to the sea defences along the German North Sea Coast.  We have been struggling for decades with sea level rise partly rooted in land down lift, but then the climate issue came on top of it. John Schellnhuber was the project coordinator for the sea defence work and I was his student assistant.  This experience more or less fixed my career direction. A direct outcome of these projects was that state governments, together with dyke associations, agreed to increase dyke height by 25-50cm.

2. What motivates you to dedicate your career to climate action and sustainability?

I believe we have to take care of our descendants. We can’t overstretch the planet because we will threaten all of our living conditions and undermine future generations.

In the past 30 years the need for energy, construction and building materials has increased by 10-fold to around 85 billion tonnes per year, according to the UN.  The demand for natural materials, such as timber, has doubled in the same period. The carbon dioxide concentration in the atmosphere is higher than at any time since the Pliocene (last 2.5 millon years).

We are already approaching the 2 °C warming threshold in Europe and we are seeing what this implies in terms of extreme events. All time record temperatures above 40 degrees, extremely dry summers, e.g. in 2019 and 2020, or extreme rainfall with more than 100mm per day. This causes €billions of damage, not only in Europe, but across the world.

We have to stop this. We have to find new solutions and narratives for a sustainable life. This is one of the main reasons I got involved in environmental research: to figure out what kind of opportunities we might have for the future.  What solutions can we find and implement? 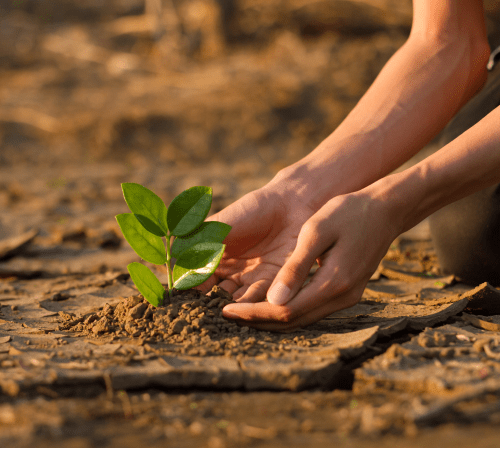 3.What are the top climate change issues right now? Is 2050 too late?

There is no silver bullet solution. Between the years 1980 and 1990 we thought it was enough to inform politicians of the consequences of fossil fuel use and the increasing carbon content of the atmosphere. They did not take it seriously. Up to the beginning of the 21st century we explained the consequences an accelerated global warming might have in forestry, agriculture and the water sector, but action was still missing. There was also discordance in the climate negotiations. Now we are seeing the consequences of disasters and what happens when three 100yr floods occur within just 20 yrs, as has happened in Germany. There is no other way, we have to bring down emissions. This is pivotal for humanity. Proceeding with our current lifestyle is not an option anymore.

We have to be visionary in exploring solutions. This means changing our individual consumption patterns too and establishing a more sustainable approach to life, especially for our cities, which emit more than 70% of greenhouse gases. As an example, do we really need all our fruit wrapped in plastic? We must look at how we produce and consume goods, manage our waste and work to better understand real circularity.

Increasingly we use solar and wind power, but economies still need energy and create emissions even in developing these resources. We must become better at energy efficiency and, indeed, we need more green energy, such as for e-mobility and green steel production.

Having said all this, I do still believe the vision to become carbon neutral by 2050, at the latest, is achievable.  Looking at my own specialist area, we must change what we do in the built environment. Much more construction can be achieved with wood. The cement industry is innovating and looking at new types of green cement, including ways of taking carbon dioxide out of the air in cement production.

The Romans invented cement, but modern civilisations turned it into a mass product with annual production of more than 4 billion tons and over 5% of global CO2 emissions. Cement is mainly based on calcium carbonate, but for construction purposes one molecule of carbon dioxide needs to be removed. This requires high temperatures generally powered by fossil fuel usage, making cement production doubly detrimental to the climate. There are many ways in which cement production can be made less problematic by changing the energy source, by making the product itself less carbon-intensive and by capturing the CO2 created more effectively.

As humanity we should develop further, from a mineral based towards a biogenic civilisation, but with a strict implementation of life-cycle assessments to ensure real sustainability of products. For example, if we continue to exploit German forests at the same pace that we have for the past 20 years, we would have the potential to build between 5-600,000 timber houses per year. Each year, by doing this, we could store up to 1 Gigaton* of carbon dioxide for a period of 80-100 yrs.

However the reality, at the moment, is that 50% of the wood harvested from German forests is used for energy. Surely this is the wrong market if we want to achieve Net Zero by 2050? We also have the challenge of managing and developing productive, mixed forest stands which is what we need for biodiversity. Mixed forests are more complicated to exploit, for example, but they could also provide more timber if managed in the right way. If managed properly they could offer an unbeatable solution to combat climate change: well-managed forests store more carbon during growth and the subsequent timber buildings store carbon for up to 100 yrs!

4.What are the benefits of carbon offsetting?

Carbon offsetting is essential if we are to manage within 1.5-2 degrees of warming globally. In Europe, we are already approaching 2 degrees of increase. At the same time everyone is waiting on decisions from policy makers, so citizens and companies must take action. They have to understand and play their role in the game and supporting carbon offsetting is part of this.

Carbon offsetting, which enables additional carbon-reduction projects, is essential and needs further development. We have to think of the markets for offsetting too as not everything we do in Europe is right for the rest of the world.

Each molecule of CO2 captured and not released to the atmosphere is good. There is much work going on to develop offset projects and to ensure that the market for offset works more effectively in future. I fear we are running out of time. It will be difficult to achieve the 1.5 to 2.0 degrees goal, but we should do what we can.

5. We’re in a climate crisis: What should we focus on right now?

Keep working! I was involved in the European Union Horizon 2020 programme, which finished in April this year. It involved a lot of projects which increasingly involved citizens. Horizon focused on helping people engage with the core problems of climate change and enabling them to see what they can do. This has an increasing emphasis in many Net Zero projects and programmes.

We investigated around 100 voluntary community-based initiatives across Europe and our research showed that if just 5% of European citizens became involved in such initiatives it would easily be possible to achieve our carbon commitments. This is astonishing and, although a big number in reality, it make this all feel possible. Everybody can help!

6.Why do you work with AQ Green TeC, a sustainability startup initiative by Aquila Capital?

AQ Green TeC supports the work that governments and big companies must do to impact the climate crisis. It also enables employees and customers to join in and support the transition. If we are going to make a success of reducing our carbon emissions we really need individual people to take personal responsibility for helping make sure change happens. As I said earlier, if only 5% of European citizens become directly involved in climate initiatives, change will happen. AQ Green TeC is helping people get involved more directly, so I am very happy to support what the team is doing.

Reach out to us by completing this form.

Our website uses different types of cookies. Functional cookies, which are absolutely necessary for the website to provide its functions and cookies from third-party providers for analysis and tracking purposes (Google Analytics, reCAPTCHA). You can review your consent at any time by clicking on the "Cookie Settings" link in the footer of this website, further information on data protection can be found in our Privacy Policy.
Necessary Always Enabled
Necessary cookies are absolutely essential for the website to function properly. These cookies ensure basic functionalities and security features of the website, anonymously.
Analytics
Analytical cookies are used to understand how visitors interact with the website. These cookies help provide information on metrics the number of visitors, bounce rate, traffic source, etc.
Others
Other uncategorized cookies are those that are being analyzed and have not been classified into a category as yet.
SAVE & ACCEPT
Powered by